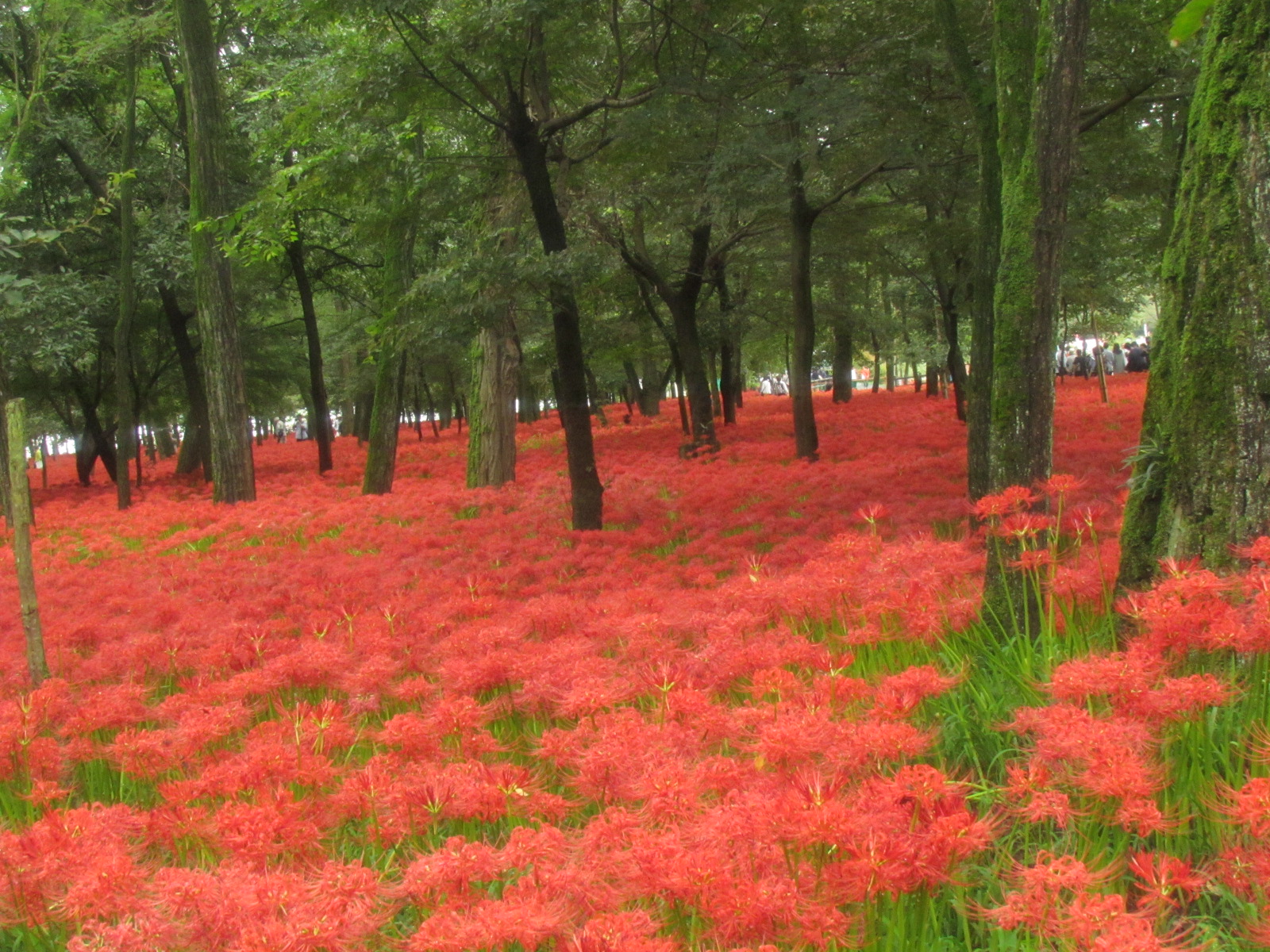 Red spider lilies know the season very well and they always become full in bloom around the Autumn Equinox Day.  This year, too.  Though it had been terribly hot this summer, the timing of the flower blooming did not change.  Since they bloom almost the same time every year, we Japanese people call this flower as “Higan Bana”.  Higan is Equinox Day and Bana is a flower.  Higan originally means the bank across the river and in Buddhism, this river means the one which divides the living world and the world after death.

So Higan also means Paradise where the dead people can go if they cross the river.  And in old days in Japan, it was believed that the Paradise is in the far west.  Therefore, on Equinox Day of Spring and Autumn, people prayed toward the west.  It is when the sun sets directly in the west.

The red spider lilies are the flowers blooming during Higan, i.e. the period of time around Autumn Equinox Day (strictly speaking there is Higan in spring, too as there exist Spring Equinox Day.). So the flowers remind me of Equinox Day and our ritual of visiting tombs to pray for the ancestors.

Red Spider Lilies are the flowers from bulbs and every year the flowers open exactly on the same place.  Since I like the shape of the flowers, every year, I look forward to this season.  Usually, I visit the Botanical Gardens near my house to see the flowers but this year, I went to a place called Kinchakuda.

Kinchakuda is a place in Saitama Prefecture.  It takes about 40 minutes by train from Ikebukuro, Tokyo.  I wanted to go there because it is famous for the vast field of red spider lilies.  It is said that there are about five million red spider lilies in this field.  It looks like the wide red carpet expands in the whole place.

The river stream is the shape of Kinchaku, a drawstring pouch

As you can see in the above map, red spider lilies spread along the river.  During the peak period of red spider lilies, which last about a couple of weeks, they hold Red Spider Lilies Festival and getting inside this field costs ¥300.  It is free of charge at other time.

It takes about just half an hour if you just walk inside the field.  But it is impossible not to take photos of beautiful flowers even if you are not a photographer.  I spent full two and half hours walking, admiring flowers and taking photos.

Most of the flowers are red but from time to time, you can find white ones.  Are they not red spider lilies anymore?

Admission: ¥300 during two weeks when the red spider lilies are in bloom.  You have to check the website to know when to go but unfortunately, I could not find the good English website.  But this page provided the information for this year so I hope they will do the same next year.

Access: 15-min walk from Koma Station of Seibu Line (50-min train ride from Ikebukuro.  You may have to change the train at Hanno Station.  Sometimes there are direct lines.  Make sure you are on the right train.)

Walking / Biking: Walking, yes!  It’s a good walk along the red spider lilies field.  There are several hiking courses visiting temples and Hiwada Mountain.  Biking, yes only you can bring your bikes with you.  I did not see any rental cycle shops although the roads to temples are good and I saw many cyclists.

Koma is an area where Korean people immigrated over 1300 years ago from the country called Koukuri in Korean Peninsula.  The area Koma was named after Koukuri.  Chinese characters of Koukuri are 高句麗 and those of Koma are 高麗.  There are several temples in Koma that enshrined Korean kings.  And those places often have two tall poles called Jengseung which came from Korea.  Jengseung stand in front of Koma Station, too.

There are two poles called Jangseung at the entrance of Koma Station.

The nature in Sado Island is really extensive from the sea to the mountains. So if you want to fully explore the nature, it is better to travel around by a car.  There are bus routes but the services are not frequent. ...

One of the largest plants markets is held in Asakusa every year at the last weekend of May and June.  Japanese people love growing plants since the old times.  People go to plants markets and buy a flower pot or two.  Sometimes they are bonsai pots.  If you visit Asakusa at ...